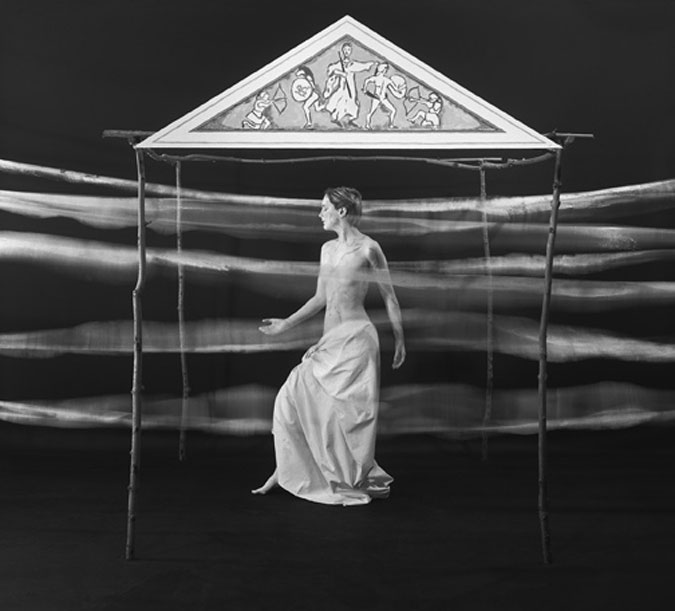 Inspired by the work of Thomas Lebrun and its reflections on the past, for this exhibit I selected five of my pivotal works from a period of intense artistic production. These are my favourite pieces, and they have great emotional resonance for me. Some of them have not been exhibited for over 30 years, while the most recent was completed just last winter. Initially a performance artist who used dance and the visual arts as her means of expression, I began to pursue photography so as to leave a permanent trace of what I was staging. Created from miniature scale models made in the workshop, the final images of my pieces hover between artifice and a credible reality. In the absence of the body, the subject shifts toward landscape as a place of emotion. Invented and intimate worlds, a disquieting site of shadows and shimmering lights, among these entrancing images lurk an ominous garden shed, an agitated sea.

Holly King was born and lives in Montreal where she teaches in Studio Art at Concordia University. For the past five years she worked as a Visual Specialist with the Intégration des arts à l’architecture program; prior to that she completed several public art projects including the very large photo mural Seascape and the Sublime at the Concordia Fine Arts and Engineering Pavillion.  Her powerful and intriguing photographs have been exhibited and collected by museums, public and commercial galleries in Canada, the United States, Europe and Asia.

Thanks to Mona Hakim for her precious collaboration.

Holly King is represented by the Art Mûr gallery in Montreal.